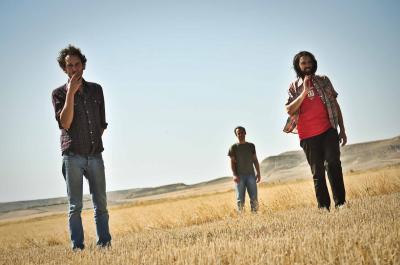 On a winter night in 2007, Julien Pras and Jimmy Kinast met at a tiny club in Bordeaux for the Berlin Vs Brooklyn show, a repetitive math-rock duet. The surprise that awaited them was huge: behind his drums, Benoit Busser was a perfect fusion of John Bonham and Todd Trainer. Blown away by his technique, Julien and Jimmy imagined the band they could form together and finally achieve their musical fantasies. Up to this moment, Julien Pras was currently promoting the 5th album of his band Calc and was dreaming of a noisy psychedelia with Big muff pedals and plenty of reverberated guitars. Next to him, Jimmy Kinast who held his bass during the 90’s in several noisy pop bands was feeding the same desire. It won’t take long before Benoit and Julien would start working together. After three jubilant and productive rehearsals, which produced two tracks, Jimmy joined them behind the bass. Obsessed by the ‘70s, from Black Sabbath to Led Zeppelin, and more recently by Dead Meadows and the band witch, the three of them formed Mars Red Sky…

The alchemy is here and they will soon start writing many songs together. Jimmy and Julien share the microphone with a heavy yet aerial universe at the same time, especially based on the use of a unique tuning a good half-dozen semitones below normal. Encouraged by the first concerts they played in Bordeaux and the response they received from a stunned audience, they decided to record their own songs within the stones of a magical Spanish place called the Bardenas Desert. Pierre Fillon, in charge of the recording and the mixing, helped shape and colour the whole project. In 2011, Mars Red Sky finally started conquering the clubs all over Europe. Opening for the great SLEEPY SUN from San Francisco, TWEAK BIRD, SHANNON WRIGHT, A PLACE TO BURY STRANGERS, EARTH and KILLING JOKE at the Bataclan in Paris. Mars Red Sky then toured Germany and Netherlands in June, performing at the festival Les Eurockennes 2011 Festival with music titans like QUEEN OF THE STONE AGE, MOTORHEAD, KYUSS LIVE…. !!!

MRS will be on tour in 2012 and will play famous festivals as Roadburn (NL), Berlin Desert Fest and many others… They will be distribute by Cobraside in the US.