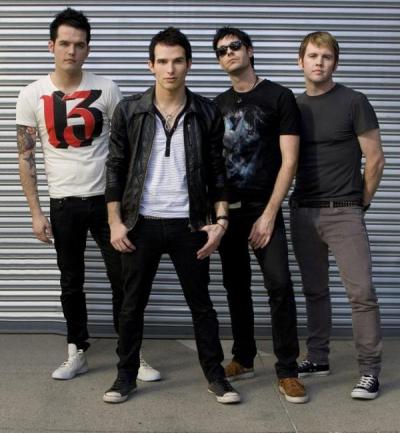 The White Tie Affair (aka TWTA) is a pop rock/electronica band from Chicago, Illinois. The members consist of: Sean-P (guitar), Chris Wallace (vocals), Tim McLaughlin (drums) (Tim is no longer in the band) and Ryan McLain (keyboard). In early 2007, the band signed with Epic Records/Slightly Dangerous and released their debut album, Walk This Way in April 2008. The album contains the band's two singles, "Allow Me To Introduce Myself…Mr. Right" and "Candle (Sick and Tired)", which have been featured on MTV's TRL and The Hills.

According to the band's biography, "the two founding members both agreed that they wanted to bring some fun back to a music scene that largely focuses on the negative aspects of life."

The band signed with Epic Records/Slightly Dangerous in 2007 and began touring with such artists as: Secondhand Serenade, Making April, Innerpartysystem, Metro Station, The Medic Droid, and Kill Hannah. In the fall of 2007, the band recorded their debut album, Walk This Way, at Annetenna Studios in Burbank, CA. In January 2008, bass player Jeremy Johnson left the band and was replaced by Ryan Cook, who also left the band in February 2009.

In March 2008, the band was invited to perform at the annual "Pajama Party" at the Playboy Mansion. That summer, TWTA joined the 2nd Annual True Colors Tour for the show's Midwestern leg, sharing the stage with Cyndi Lauper, the B-52's and Rosie O'Donnell. TWTA also headlined several dates of Kill Hannah's Hope for the Hopeless tour during this time, along with The Medic Droid. That fall the band was part of Playboy's Girls of the Big 10 Tour and was featured in a fashion spread in the magazine's November issue. TWTA was also featured on episode six of MTV's The Hills. In December of 2008, the band's remix of All Black was included in Good Charlotte's Greatest Remixes release.

In 2009, the White Tie Affair toured with Secondhand Serenade and served as the opening act for Lady Gaga, who started her first solo North American tour, The Fame Ball Tour, in March. Following the Lady Gaga tour, the band will take part in Van's 2009 Warped Tour. The White Tie Affair (or at least Sean P., Chris Wallace, Ryan McLain, and Tim McLaughlin) will join bands such as Thrice, NOFX, 3OH!3, All Time Low, Cash Cash, and Alexisonfire at the summer-long music festival.

In October 2009, The White Tie Affair hit the road for their headlining tour along with Every Avenue, Stereo Skyline & Runner Runner.

In 2010 the drummer, Tim McLaughlin left the band shortly after their headlining tour "The Traveling Talent Show." There is currently no permanent replacement for the bands drummer. TWTA also recorded their 2nd album that is set to be released in the fall of 2010. On April 13, 2010 their single off the new album "You Look Better When I'm Drunk," was released.