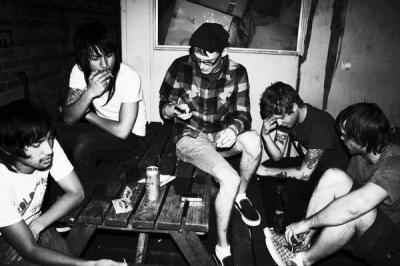 TOP песен исполнителя
"The Ghost of a Thousand"
имя:

The Ghost of a Thousand

Это интересно: The Ghost Of A Thousand is an English five-piece punk rock band from Brighton, UK.After signing with Undergroove Records in 2007 the band toured extensively, playing alongside Zico Chain, Gallows, Alexisonfire, Saosin, Poison the Well, and Reuben. They have also had a presence on the festival circuit: playing the Lock Up Stage at the 2007 Reading and Leeds Festivals. In October 2008 bassist Gez Walton left the band, citing musical differences. The band’s previous bassist Gaz Spencer returned in his place. In February 2009, it was announced that the band had signed with Epitaph Records to release their second album New Hopes, New Demonstrations.
Альбомы исполнителя «The Ghost of a Thousand»: