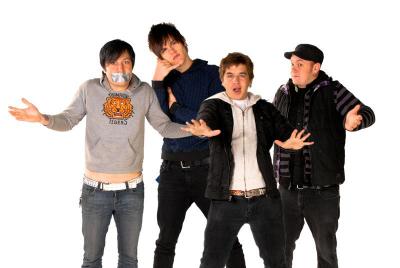 Danger Is My Middle Name

Everybody needs a little danger in their lives, and that is exactly what these boys are getting accomplished. Formed in late January 2007, Danger Is My Middle Name has hit the ground running after members of well known Chicago bands, (August Premier, Blacktop Mourning, The White Tie Affair, and Witroy), decided to form a group that was dedicated and hard working right from the start.

In early 2007, singer/guiatrist Gabe Atkins, bassist Craig Miller, guitarist Bill Cox, and drummer Mickey Molinari jumped into the studio with producer Mike Hari, (Witroy, Triumph & Parade, The Alumni Club), to record a two song EP titled: "When We Die Only Our Enemies Leave Roses," and instantly began touring the Midwest just a month after the bands formation. In March 2007, still in its infant stages, the band went to work in Minneapolis, MN with producer Matt Kirkwold of World Record Productions, (Quietdrive, Lucky Boys Confusion, American Taxi), on a three song EP titled "Revenge On The Radio," released July 29, 2007. The EP, spawned the hit title track which, even before being released, had been picked up by college radio stations and placed on internet radio sites.

On top of winning over indie radio stations, the band has been the featured artist on PureVolume twice, as well being the buzzseeker band on The Daily Chorus. Danger Is My Middle Name continues gaining a stronghold on the Chicago music scene with its growing fanbase, as well as striking gold in other Midwest markets including Minneapolis, MN (hometown of Gabe) and Northwest Indiana (hometown of Bill).

Danger Is My Middle Name is a band that knows how to work hard, and knows what it takes to get to the top. The band has also been a part of Summerfest 2008 and Warped Tour 2008. Danger Is My Middle Name continues to make a big name for themselves. These boys sum up exactly what they are here to do in the lyrics to their song "Heroes & Underdogs" from their debut EP. "Tonight we're taking over